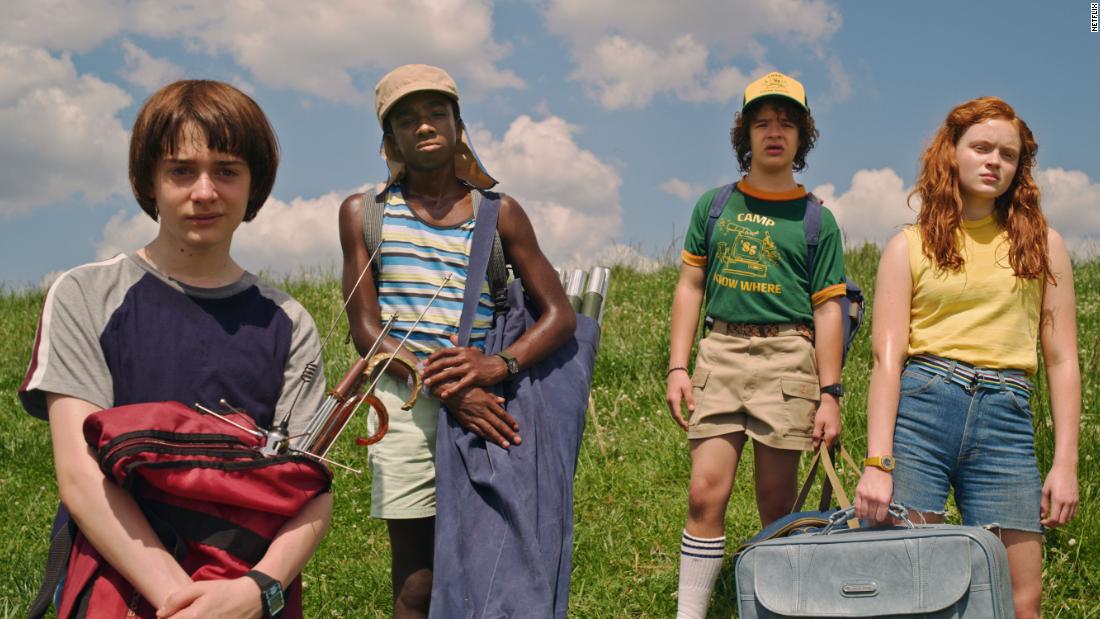 This one was also a preeminent saliva-swapping song of its day. The group’s music also appeared in films like “The Goonies” — a major “Stranger Things” influence — and “Vision Quest,” a fondly remembered teen romantic comedy from 1985 and early breakout role for Matthew Modine, now remembered for his role as Dr. Brenner.

“Material Girl” and “Angel” by Madonna

“Vision Quest” also offered up Foreigner’s 1978 platinum hit “Hot Blooded,” still a rock radio staple in the ’80s which here serves as the score for Karen Wheeler’s (Cara Buono) escalating ardor for a rendezvous with Billy (the same band’s reversal tune “Cold As Ice” also comes into play). So you might as well add the whole thing to your playlist.

“Lovergirl” by Teena Marie, “Things Can Only Get Better” by Thompson Twins and Rock This Town” by Stray Cats.

Throughout the season, more ’80s staple songs emerge, from artists with briefly white-hot but less-lasting career arcs, like Teena Marie, the Thompson Twins, and Stray Cats. The latter group’s leader, Brian Setzer, would later spearhead the rockabilly-swing movement of the ’90s.

This season is packed with songs evoking beloved films of the era, like “Neutron Dance” from “Beverly Hills Cop” and Jackie Wilson’s classic ’60s soul hit “(Your Love Keeps Lifting Me) Higher and Higher,” which was featured in “Ghostbusters II.”

“R-O-C-K in the USA” by John Mellencamp

There are also cuts from more enduring acts, like “R-O-C-K in the USA” from the artist formerly known as John Cougar Mellencamp (a huge party hit nearly left off his tonally ambitious “Scarecrow” album), and “Workin’ for a Livin’,” a signature song from Huey Lewis & the News, who’d reached new heights with two hits on the soundtrack of that summer’s blockbuster “Back to the Future.”

“My Bologna” by Weird Al” Yankovic

Some of the third season’s best inside meta-gags come with music cues: when Joyce (Winona Ryder), makes a visit to science teacher Scott Clarke, his uber-nerd credentials are immediately established by his home listening preference: “Weird Al” Yankovic’s’ “My Bologna,” a parody of The Knack’s “My Sharona,” which itself later fueled a memorable scene from the 1993 comedy “Reality Bites” featuring a dancing, singing-along performance from Ryder.
Like we said, meta.

“The NeverEnding Story” by Limahl

Dustin’s coerced over-the-air duet with his summer camp girlfriend Suzy on a song offered with little context within “Stranger Things” but oh-so-familiar to anyone living their best nerd life in the ’80s. “The NeverEnding Story” theme comes from the 1984 fantasy film of the same name, which genre-loving children of the era still hold close to their hearts.
Composed by the most ’80s movie musician of them all, power synth maestro Giorgio Moroder (“Top Gun,” “Flashdance”) and performed by British pop singer Christopher Hamill under the anagrammatic stage name Limahl, it was a surprisingly massive hit across Europe, Australia and North America — and, given the feels induced by Dustin’s serenade of his long-distance love, likely to dominate the summer Spotify playlists of “Stranger Things” fans born decades after its initial chart-topping run.

Get 250+ Daily Website Visitors On Complete Autopilot in ANY Niche with 100% Real FREE Traffic
The Mom Money Masterclass: Cash In On The Mom Blogger Boom!
Cash Grant Free Loans Never Repay Grants Money Keep It
Make Money Giving Away Our Books
How To Make Money In The Home Based Salvage And Recycling Business